It’s January 23. We are beginning our 4th week of the year. How are you doing with that New Year’s Resolution to lose weight? To exercise more? My gym is packed as it is every January. But I know that by Valentine’s Day I’ll no longer have trouble getting a bike in spin class and I won’t have to stand in line for the shower.

I’d like you to meet a friend on mine. Will McKenzie and I teach English as a Second Language together. Last year he had to take a hiatus due to his school schedule. When he returned a semester later, the only reason I recognized him was that I’d seen Facebook photos of his incredible transformation. Other teachers in our program had no idea who he was; the change was that dramatic.

Will didn’t begin his journey on January 1. He began during the holidays of 2010. I hope you’ll enjoy his story which he wrote last month.

One morning a little over a year ago I awoke and looked in the mirror and what I saw both frightened and disgusted me. I was five foot ten and weighed 290 lbs. I was eating like a garbage disposal, and I looked like it. I had been regularly buying a bag of donuts and a gallon of whole milk to wash it down, then grabbing a king size Snickers on the way out the door to hold me over until I got home and could open my bag of donuts. I was slowly killing myself. I wore a size 44 pants and an XL shirt and most women looked at me as that cute, fat guy. I had had enough.

I had a fiancé, a recent foray back into world of education, and the sense that my life was actually looking up. But I realized that might not be a good thing because I was headed to an early grave.  So I started looking around. I got all über motivated and thought “I’m a former Marine, I’ll do P90X.” I made it half way through the first routine and collapsed. So I started looking at better options. I discovered Power 90. It was a much slower and easier routine which someone in my condition certainly needed.

I was in Kroger one night buying my customary bag of donuts and overheard someone talking about “eating clean.”  At first I thought she was referencing one of those miracle diets, but as I looked into it I realized she wasn’t and that what she was saying actually made sense. So my fiancé and I began eating healthier right at the beginning of the holiday season.

We passed on all the cakes and candies at my grandmother’s and we ate within our portion sizes; we worked out on Christmas day. After only a month I had dropped 15 lbs and my fiance had dropped 7. Encouraged by our results we pushed on, moving from Power 90, to the P90 Masters Series to P90X. I went from not being able to walk up a flight of stairs to being able to do plyometrics for an hour without a break. I have lost a net of 70 lbs. I went down to 195 lbs and then put 20 lbs back on. This was actually planned, though as I wanted to bulk  up and put on some muscle. I am now shedding some fat over the holidays and plan to be back down to around 200-205 by the time school starts back at which point I will back in the gym hardcore trying to pack on some more muscle for summer.  I will be paying even better attention to what I eat.

The moral of the story is that if my fat, slovenly rear end can quit making excuses and get it done anyone can. I did the whole “I’m just big, I have a slow metabolism; I don’t really eat worse than anyone else”…blah blah blah. I had to quit lying to myself and just do it. I was hungry, I was sore, and I was sweaty and miserable. Heck that still applies to me on a regular basis, but I am also healthier, have more energy, and am stronger than I ever have been in my life…at thirty six years old.

The trick is to realize what you need to do, find the program you can do, and commit to it. In over a year I have missed a total of 10 workouts. If you do not commit you will not succeed so quit messing around eating cottage cheese to stick to your “diet” and make the switch.

It is a lifetime thing. 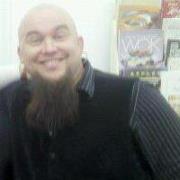 Here's Will before he began his health transformation.

Look at him now! (Note: since this photo was taken he's grown out his hair and beard. He still looks great!)

This entry was posted in Health and Fitness and tagged P90X, Power 90. Bookmark the permalink.